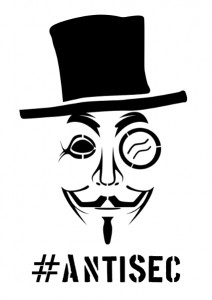 Over the past few months you’ve ignored demands from Anonymous to withdraw from your quest for internet censorship, despite many attacks from anonymous. With recent events, more and more have joined Anonymous, only to prove that for each fallen Anon, there are many.

In the heights of #ANTISEC, people from all over the world will join united against corrupt governments throughout the world, including you Government of Tunisia and fight for the truth.

We will not stop until internet censorship is a word in history books, as a failed attempt by nations to brainwash their people into believing what those in power believe. We believe that internet is the last frontier, and will not let corrupt governments of the world spoil that. We believe that freedom of speech and freedom of knowledge is a basic human right.

People of Tunisia, continue fighting for truth, and know that #ANTISEC is on your side. We will not stop until all corrupt governments of the world are exposed, and truth rains down.

People of the world, sail strong and fast and remember that corruption only brings mutiny. Continue ravishing corrupt vessels and gain booty, for all to feast upon. Make sure to always deliver, for corruption must be shown.

We Are LulzSec.
We Are People from around the world who are stepping up in the name of freedom.
We Are Anonymous, We Are Legion, We Do Not Forget Censorship. We Do Not Forgive Corruption. Expect Us.